When Will the Longhorns Get their QB Quinn Ewers (SC Sprain) Back? 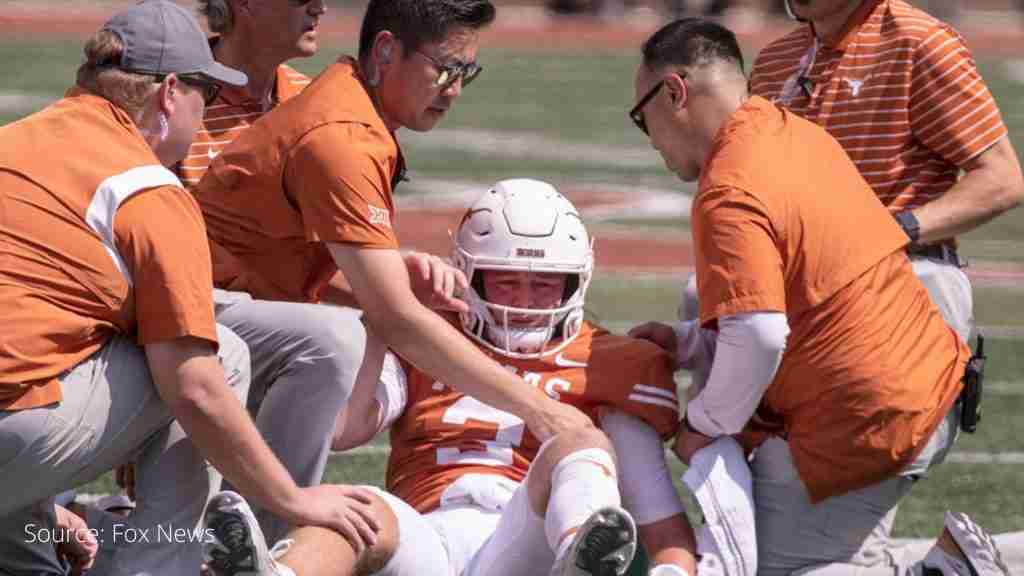 Last Saturday,  Longhorn fans were in for a shock when four of their players were injured during the Texas vs. Alabama matchup. One of those players was Quinn Ewers, the redshirt freshman quarterback transfer from Ohio State. Ewers, a five star pro-style QB, was expected to carry UT through a great season this year. However, with his current SC injury, he will be out for the week 3 home game against UTSA.

Ewers started off the game strong Saturday afternoon, and was 9-of-12 passing for 134 yards. With 31 seconds left in the first quarter, the QB was hit by Alabama linebacker Dallas Thomas. It was immediately evident that Quinn was injured as he stayed on the ground for quite some time before exiting the field. Alabama was flagged for roughing the passer as officials said he drove the quarterback into the ground. Ewers later returned to the sideline and remained there for the rest of the game in a sling.

With Quinn out, Hudson Card was called in. By the third quarter, Texas had their third string quarterback warming up. Card was struggling with an ankle injury that clearly limited his mobility and speed, yet stayed in the game until the end.

After an MRI, Texas determined that Quinn Ewers suffered a SC sprain which is an injury to the joint where the sternum meets the clavicle. The recovery period for his injury is between 4-6 weeks, meaning that the earliest he could return is on October 8th for their game against Oklahoma. Quinn has noted that he is experiencing significant amounts of pain when completing simple tasks such as swallowing or breathing. According to Coach Sarkisian, he is on a day-to-day basis for return (but in reality, this isn’t something he can try to play through anytime soon).

SC sprains are fairly uncommon injuries and take an incredible amount of force to occur. We’ve seen a few NFL players suffer this injury, Ben Roethlisberger in 2012 and Tyreek Hill in 2019 (although his was a SC joint dislocation, which is more severe). Because this joint is located in the upper chest area, it affects very basic things like breathing and using your arms. Ewers likely won’t throw for at least a few weeks.

When asked about his four injured players, Quinn Ewers among them, Coach Steve Sarkisian said, “I know you guys are going to want an exact timetable and are going to ask specifically, and I’m going to tell you now, they’re day-to-day. I really don’t know. We are going to have to monitor them every morning to see where they’re at. The beauty of it for all four of these guys is it’s nothing structural. It’s not surgery driven. It’s not broken. It’s not ligament damage.”

Even with their starting QB out, Texas still managed to hold their own against No.1 Alabama missing the win by only 1 point.