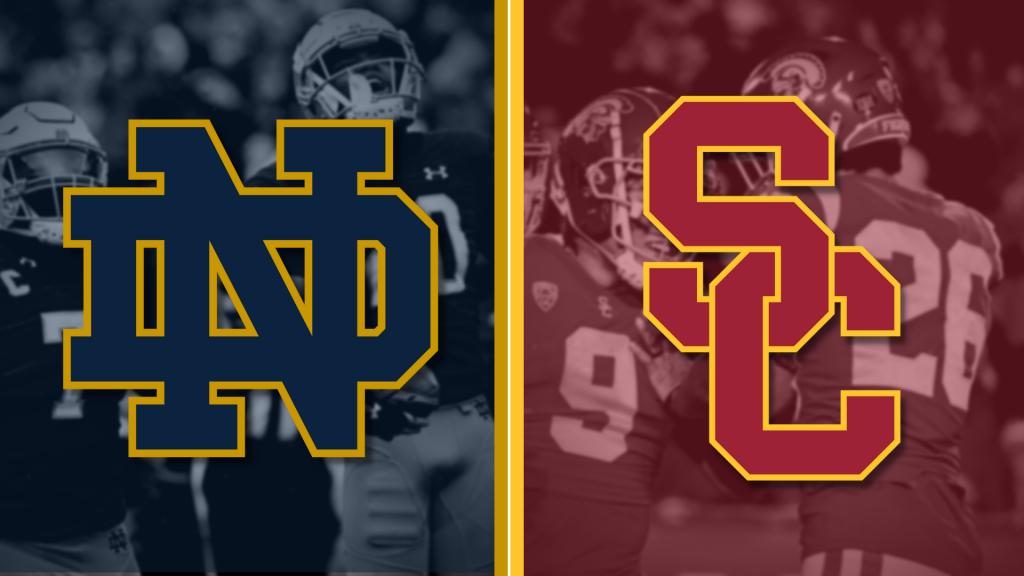 For the 93rd time in college football history, Notre Dame and USC will face off in a battle for the Jeweled Shillelagh. This time, there are also playoff implications. #6 USC is looking to close out their season with just one loss, which would keep their hopes at sneaking into the College Football Playoff alive. If they can beat Notre Dame they’d finish the regular season 11-1, which would be their best season record since 2008.

#15 Notre Dame, on the other hand, will look to make it five consecutive victories over the Trojans. Their hopes at the playoff may have ended after Week 2, but it certainly would make this season a little more special if they could end the hopes of their bitter rival.

The Fighting Irish entered this season as the #5 team in the country, but fell out of the Top 25 after losses to Ohio State and Marshall. They rallied to win their next three games, but suffered another embarrassing loss to Stanford in Week 6. Since then, they’ve been on a tear, winning five straight. During the win streak, they topped a scrappy Syracuse team before routing Clemson to quiet all haters.

Notre Dame’s saving grace has been the resurgence of their defense. They’re holding opponents to just 20.2 points per game, which is tied for the #27 scoring defense in the country. They’ve also grown to be one of the nation’s premiere passing defenses. Opponents average only 186.8 passing yards per game – #16 in the country – and have just 16 touchdowns against nine interceptions.

In those four games, they’ve scored 62 points off turnovers – 17 more than any other FBS team in the same span – including 27 against Boston College last week.

USC’s defense has been even better this season at forcing turnovers and not giving the ball up. At a +21 differential for the season, the Trojans lead the FBS and have seven more than the next-closest team (Duke, +14). But if any team can force turnovers against USC, it’s Notre Dame. The Trojans have committed seven turnovers over the last four contests to Notre Dame’s two.

That being said, Caleb Williams – the Trojans’ quarterback – has shown exceptional decision making throughout much of the year. Heading into the final week of the regular season, Williams ranks sixth in the nation in total passing yards (3,480) and tied for fourth in passing touchdowns (33) while throwing only three interceptions.

If Notre Dame’s defense can capitalize on their strengths and maintain the intensity they’ve shown over recent weeks, they will put themselves in a good position to win this game. It will be their toughest challenge since Week 2 when – despite the loss – they held Ohio State QB C.J. Stroud to just 223 yards and two touchdowns.

Meanwhile, if Caleb Williams can maintain his Heisman-caliber season he will establish himself as the clear frontrunner and catapult his team into the College Football Playoff.