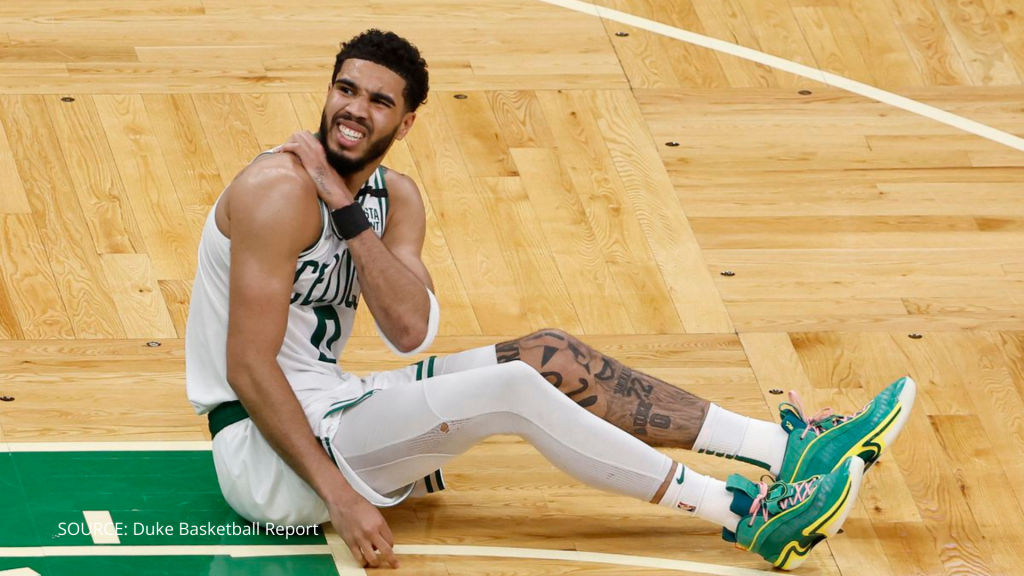 Jayson Tatum will be a game-time decision in game 4 for the Celtics due to a right cervical nerve impingement, but is likely to play according to head coach Ime Udoka.

Initially the injury appeared to be shoulder related. In Game 3 of the Eastern Conference Finals against Miami, Tatum was having a rough night heading into the 4th quarter, shooting just 3-10 from the field. With five minutes remaining, Tatum was driving towards the basket when he had the ball stripped by Heat defender Victor Oladipo. The contact between the two left Tatum on the floor grabbing for his shoulder, writhing in pain.

He remained on the floor for a few minutes, with his team playing around him, until a timeout was called. Tatum was met by trainers, helped off the floor, and walked to the locker room where he was examined for a few minutes before checking back in.

The Celtics would go on to lose 103-109, and after the game Tatum spoke with the media about what happened. “My neck got caught in a weird position,” Tatum said. “Obviously I went down and felt some pain and discomfort in my neck and down my arm. Then went to the back, got it checked on and started to gain some feeling back and got it checked by the doctors and ran some tests and decided to give it a go.”

He has since been diagnosed with a cervical nerve impingement (radiculopathy) on his right side; this is more commonly referred to as a “pinched nerve.” The “pinching” is caused by excess pressure from surrounding tissues, such as bones, cartilage, muscles or tendons. While they can be incredibly painful, pinched nerves heal well on their own with rest, and often don’t require surgery.

Tatum is expected to play on Tuesday night, and our algorithm agrees that he is ready to play, but he won’t be 100%. His Optimal Recovery Time is six days away, and his Injury Risk is Elevated (21%) while his Health Performance Factor is Above Average (68%).

He is looking to put Game 3 behind him, and is holding himself accountable heading into Game 4. “Six turnovers and no field goals in the second half [of Game 3], that is unacceptable,” Tatum said. “Honestly, I’ve got to play better. I feel like I left the guys hanging [in Game 3]. That’s on me.”