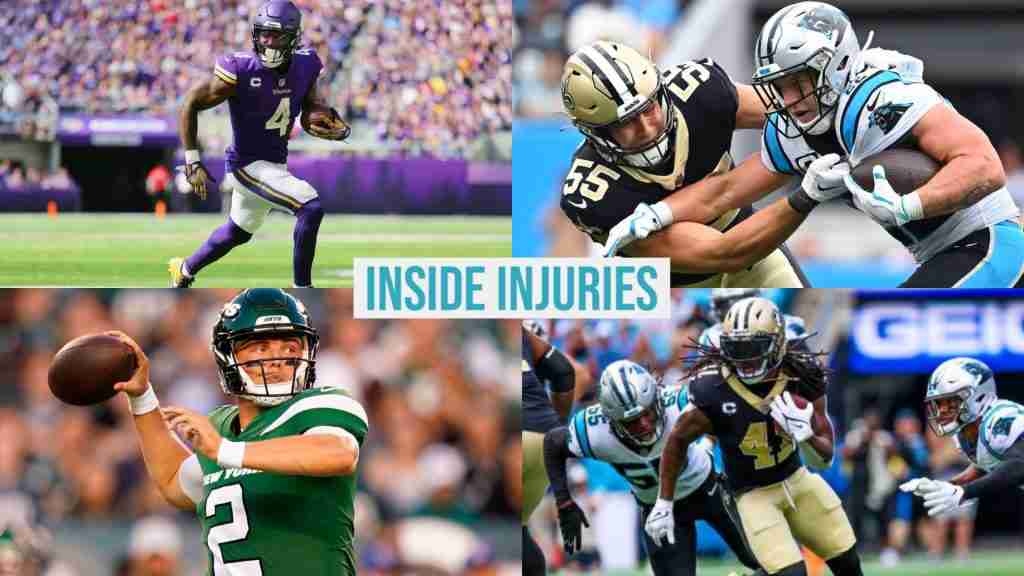 Alvin Kamara – OUT – this is the first surprising injury status of the day as he has been ruled out. Kamara played through a rib cartilage fracture in week 3 but it clearly bothered him. This is an injury that is slow to heal, very painful, and easily aggravated when taking hit after hit. It’s going to take 4+ weeks for it to fully heal.

Jameis Winston – OUT – Winston is another guy who played through his injuries in week 3 (and week 2), but he really didn’t look good. Winston suffered four back fractures in week 1 and then injured his ankle in week 2. These are two limiting injuries that affect mobility and are painful to play through. It’s smart to rest him so he can get healthy and return to performing at a high level.

Dalvin Cook – He is expected to play despite dislocating his shoulder in week 3. Cook dislocated his shoulder multiple times in 2021 but didn’t miss much time. The dislocations did cause a torn labrum. This is important for shoulder stability, and each time he dislocates it that tear can get worse. At some point he won’t be able to continue to play through this and will need surgery. For now he will wear a harness, which reduces mobility of the shoulder and helps to protect it. He put up good numbers last season playing with a harness and could do so again today, but his risk of re-injury is incredibly High. Cook could also be in and out of the game as he takes big hits. You have to start him if he’s on your fantasy roster, but stay away in DFS. I’m also expecting to see a lot more of Alexander Mattison today, which could cap Cooks’ upside.

Cordarrelle Patterson – The Falcons are expecting their starting running back today, although his knee injury is reportedly very painful. We don’t know what exactly is injured, but we do know he won’t be 100%. He’s a much riskier fantasy start today. He’s a risky flex option today and should be avoided in DFS.

Zach Wilson – He’s back! Wilson underwent surgery to address a torn meniscus in the preseason and has reached his Optimal Recovery Time. He isn’t a great fantasy option in the Jets offense, but he should be close to 100%.

Julio Jones – The Bucs will have their receiving corp back today but Jones remains a very high injury risk. He has been out two games with a PCL sprain, and our algorithm shows it won’t be fully healed yet.

Chris Godwin – Like Julio, Godwin is back after missing two weeks. Godwin was active week one despite being just 8 months removed from surgery on his torn ACL. He quickly suffered a hamstring strain, which is a common injury when coming back from a torn ACL. He remains a very High Injury Risk and comes with a Below Average HPF. The hamstring impacts explosiveness. Godwin also wasn’t able to get in a full practice, which I don’t like.

Mac Jones – OUT – the Patriots made the right decision and ruled him out with a high ankle sprain. He’s in danger of missing more time.