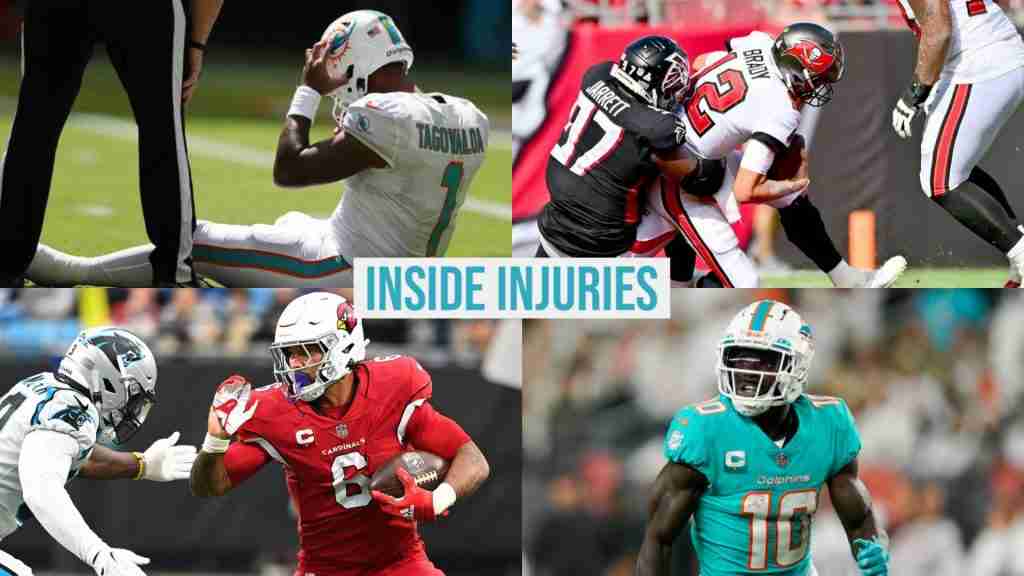 Through five weeks of the NFL season we are 22/28, an incredibly hot pace. While we may not keep up that high of a percentage all year, there’s clearly a reason why our bets have been so accurate. All of our selections are powered by the Inside Injuries algorithm, which calculates a Health Score for every single team. From there we can see where one team has a significant advantage and apply that information to the spread and over/under. We can also see how the four position groups match up between two teams.

So let’s get started. Here are our favorite NFL bets for week 6!

Once again the Buccaneers head into the weekend with plenty of injury concerns. They remain one of the most injured teams in the NFL, and it’s been showing on the field. Chris Godwin is banged up (hip, knee), Julio Jones hasn’t practiced due to the PCL sprain, and the defense has plenty of injuries. According to our position group analysis, both the offensive skills and defensive secondary for the Bucs come with a Poor Health Score.

Both offensive groups for the Steelers (offensive skills and offensive line) come with a Peak Health Score, so they have a significant advantage over the Bucs defense. The biggest concern for Pittsburgh is their secondary. Cameron Sutton (hamstring), Ahkello Witherspoon (hamstring), Levi Wallace (concussion), Minkah Fitzpatrick (knee) and Terrell Edmunds (concussion) were all on the injury report this week.

Prediction: The Bucs have the talent to win this one, but it will be close. Bet on the Steelers to cover. I’m also taking the under as the Bucs offense is banged up and the Steelers offense has been underwhelming.

The Dolphins will have to survive at least one more week without Tua Tagovailoa. He is progressing through concussion protocol but won’t be cleared ahead of week 6. Teddy Bridgewater also remains in concussion protocol. Even if he gets cleared he will backup rookie Skylar Thompson. Tyreek Hill also isn’t 100% as he battles a foot injury, and Jaylen Waddle has a mild groin injury. Both should play, but their injuries will cap their upside.

Minnesota’s offense has remained fairly consistent this season. The Offensive Line Health Score is Optimal, while the Offensive Skills Health Score is Good. Their injury report was also pretty short this week. Alexander Mattison was limited with a shoulder injury and is officially questionable, but this should only affect them if Dalvin Cook goes down. When comparing the four position groups, the only advantage for the Dolphins is at defensive line.

Prediction: The Vikings won’t have any problem beating the Dolphins. Bet on them to win by more than a field goal.

The biggest loss for the Seahawks so far this season is Rashaad Penny, whose season is over after he suffered a fractured ankle with ligament damage in week 5. Now they will rely on rookie Kenneth Walker III, who missed the start of the season with hernia surgery.

The Cardinals are in much worse shape, with the biggest concern at running back. James Conner suffered a rib injury in week 5 and won’t be available. Darrel Williams is also sidelined with a knee injury. The offensive skills group comes with a Poor Team Health Score, and the Defensive Line Health Score is Moderate. Those are the two areas where the Seahawks have a significant advantage. Geno Smith has been one of the season’s best surprises so far, and that will continue against Arizona.

Prediction: The Cardinals may be favored, but the Seahawks will find a way to win this one. Bet on them to cover, and take the under as both teams have an injury problem at running back.

Subscribe today for full analysis on every single team, plus we’re offering a 7 day FREE trial!