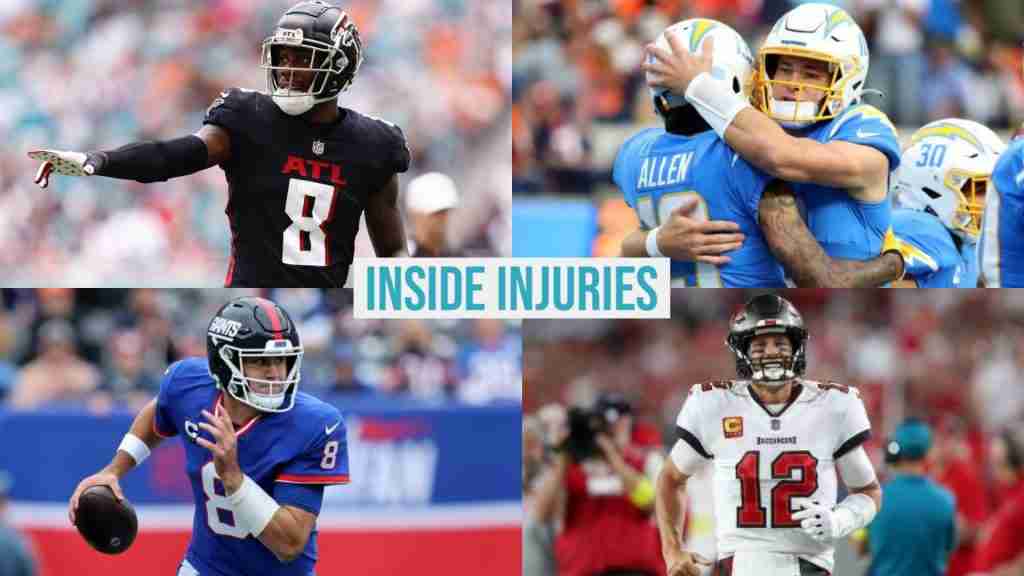 Through four weeks of the NFL season we are 19/23, an incredibly hot pace. While we may not keep up that high of a percentage all year, there’s clearly a reason why our bets have been so accurate. All of our selections are powered by the Inside Injuries algorithm, which calculates a Health Score for every single team. From there we can see where one team has a significant advantage and apply that information to the spread and over/under. We can also see how the four position groups match up between two teams.

So let’s get started. Here are our favorite NFL bets for week 5!

*FREE Matchup of the Week

Despite losing Cordarrelle Patterson and potentially Kyle Pitts, the Falcons have one of highest Team Health Scores across the NFL. The Bucs? Not so much. While they are getting some players back from injury (Julio Jones, Chris Godwin), I’m not convinced they are all healthy enough to play and be effective. That leave the Bucs with a Poor Team Health Score.

The only concern I have with the Falcons is their offense without two key players. Patterson is set to miss at least four games after undergoing arthroscopic surgery on his knee. Kyle Pitts is also in danger of missing week 5 due to a hamstring strain. Somehow the Falcons haven’t been able to get him involved in the offense, so it might not have a huge impact as they take on the Bucs. Otherwise the Falcons are in excellent shape.

The offensive skills position group is the biggest concern for the Bucs, as it has been all season. Tom Brady injured his right shoulder last week and may be playing through a mild rotator cuff injury. Julio Jones has returned from a PCL sprain but remains a High Injury Risk. Chris Godwin was cleared to play week 1 following ACL surgery but quickly strained his hamstring. He is back but clearly not 100% yet. Leonard Fournette and Mike Evans come with a High Injury Risk due to their history. Finally Cameron Brate remains in concussion protocol. That’s a problem with basically every important player in their offense.

Inside Injuries Prediction: The Bucs will win, but this one is going to be a one possession game. Bet on the Falcons to cover, and take the under due to all of the question marks on offense for both teams.

The Giants biggest concern is their offensive skills group, highlighted by the ankle injury to Daniel Jones. He suffered a mild high ankle sprain in week 4 but is going to play in week 5. Realistically it will take at least three weeks for the injury to fully heal, so his mobility will be significantly impacted. Backup QB Tyrod Taylor remains in concussion protocol and won’t be available, so it’s more important than ever that Jones is able to go and healthy enough to finish the game.

The final injury report lists quite a few other players as out – Kenny Golladay (knee) and Kadarius Toney (hamstrings) are both unavailable, so New York may be forced to rely on Saquon Barkley even more than usual as the passing attack is in trouble.

Inside Injuries Prediction: The Packers will take care of business and cover.

The Chargers Poor Team Health Score might surprise you given the fact that Justin Herbert played in week 4, but he just didn’t look good. Herbert is battling a rib cartilage fracture that’s going to continue to be painful for at least a few more weeks. This is an injury that lingers and could require a nerve block or extra protection as he plays through it. Keenan Allen also aggravated his hamstring injury and won’t be available. These are the main reasons why the Chargers offensive skills position group come with a Moderate Health Score.

Meanwhile the Browns are in decent shape. The biggest concern is the Defensive Line, which comes with a Position Group Health Score of 1, which is Poor. Jadeveon Clowney has yet to practice as he nurses an ankle injury, missing the last two games. Myles Garrett (biceps) is on track to return but likely isn’t healthy yet following his car crash. CB Greedy Williams, who was on IR, was also designated to return and returned to practice Wednesday.

Inside Injuries Prediction: The Chargers are slightly favored, but the Browns are going to find a way to win this one. Take the under.