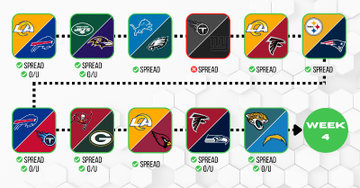 Inside Injuries hit on all 7 of our picks last week. That’s right, 100%! Through three weeks we are 16/17, an incredibly hot pace. While we may not keep up that high of a percentage all year, there’s clearly a reason why our bets have been so accurate. All of our selections are powered by the Inside Injuries algorithm, which calculates a Health Score for every single team. From there we can see where one team has a significant advantage and apply that information to the spread and over/under. We can also see how the four position groups match up between two teams.

So let’s get started. Here are our favorite NFL bets for week 4!

This matchups between the Saints and Vikings is our pick of the week due to how lopsided the Team Health Scores are.

The Saints are unlikely to have QB Jameis Winston as he works through a few injuries. Winston made a quick recovery from his ACL tear and was ready to go in week 1, but he suffered four back fractures that he has been playing through. These are likely transverse process fractures, which can be very painful but aren’t structural. Winston also injured his ankle. He hasn’t been very effective over the last two games, and the Saints are finally planning to sit him to give him time to heal. Michael Thomas is also out with a toe injury he suffered in week 3. The running game will continue to be impacted by Alvin Kamara’s rib cartilage fracture he suffered in week 1. It only forced him to miss one game, but it isn’t going to be fully healed for at least a few more weeks.

On the other side, the Vikings are in pretty good shape other than Dalvin Cook. The running back dislocated his shoulder again in week 3. He’s going to play, but that shoulder is very unstable. He dislocated it multiple times last season, causing a torn labrum. Cook opted to avoid surgery in the offseason. That means he will continue to be vulnerable, and eventually he won’t be able to play through it.

Inside Injuries Prediction: I’m hammering the Vikings in this one. Bet the under as the Saints offense won’t do much to help hear.

The Lions are going to be missing two key pieces this weekend. Amon-Ra St. Brown has already been ruled out with what looked like a high ankle sprain. D’Andre Swift is also expected to sit due to a shoulder injury. Last season Swift missed a month with an AC sprain, and I believe his current injury is an aggravation. Without two key playmakers this offense is going to struggle.

On the flip side the Seahawks are in decent shape. They have an advantage in all four position matchups (offensive vs. defensive line, offensive skills vs. defensive secondary) and should be able to handle the Lions.

Inside Injuries Prediction: I’m betting on the Seahawks to cover and taking the under. I don’t see how these offenses put up 48 points, especially given the health of the Lions.

The talk of the week was Christian McCaffrey landing on the injury report yet again. This time it’s his thigh. CMC missed practice Wednesday and Thursday but was able to participate on Friday. He is officially questionable but I’m expecting him to play. Laviska Shenault is also questionable with a hamstring injury.

Inside Injuries Prediction: The Cardinals have a very slight edge in Team Health Score, so I’m betting on them to win in a close one. Take the under as these are two teams with concerns on offense.

For more analysis and Health Scores on every single matchup, subscribe to Inside Injuries!