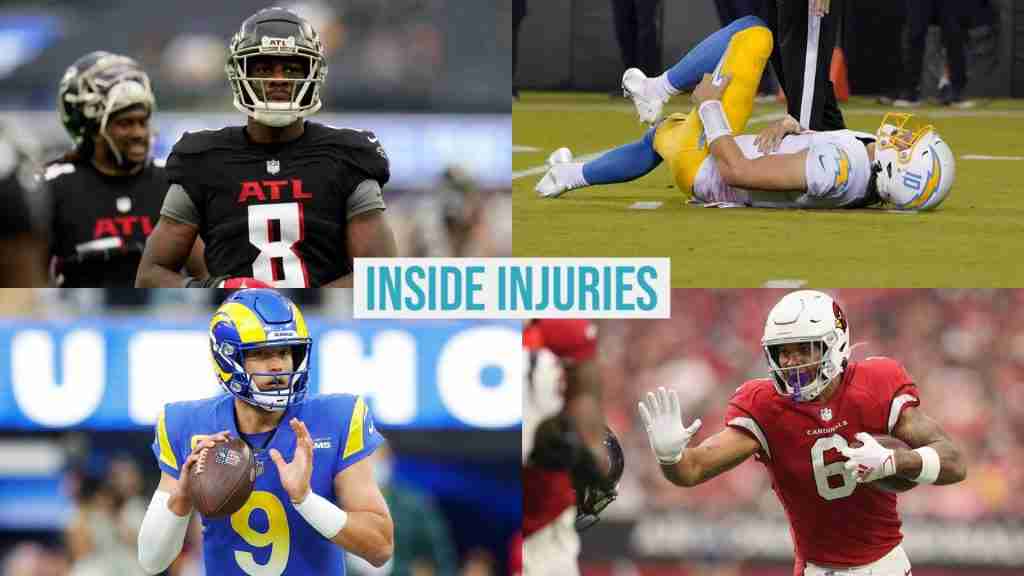 Inside Injuries got off to a hot start in week 1 and week 2, with winning picks on 6/7 matchups we covered! Plus we correctly picked the over/under on 3 matchups. If you want to win more money this week, read up on which bets we like heading into week 3!

It’s the first meeting between these two teams since the 2021 NFC Championship Game, and the fifth time Tom Brady and Aaron Rodgers have met head-to-head. Brady and the Bucs offense are going to be short-handed once again. Julio Jones (knee) and Chris Godwin (hamstring) aren’t expected to suit up, Mike Evans is suspended, and Leonard Fournette is still battling that ankle injury. He rushed 24 times for 65 yards in week 2, good for a measly 2.7 YPC.

The biggest injury for the Packers is the health of David Bakhtiati, who continues to deal with a bum knee. He didn’t play at all in 2021 and has yet to make his season debut. It doesn’t look like it’s going to happen this weekend.

When looking at how each position group will match up, the Packers have the advantage in all four phases – offensive line, offensive skills, defensive line and secondary. I just don’t see how the Bucs pull this one off. They might be able to keep it close for awhile, but the Packers will pull away.

Inside Injuries Prediction: I really don’t understand why the Bucs are favored here. Place those bets on the Packers all day. I’m also taking the under because the Bucs don’t have much fire power in their offense right now, and Tom Brady is finally starting to show signs of aging.

The Chargers are touchdown favorites over the Jaguars, and if they are going to cover they need Justin Herbert to show no signs of being affected by his rib cartilage fracture. The trouble is this is a very painful injury. The offensive line is going to have to do a great job protecting him. We’re also likely to see him run a lot less in order to avoid taking hits. I’m expecting Herbert’s mobility to be limited, which caps the upside of this offense.

Meanwhile the Jaguars defense held the Colts scoreless in week 2. That offense isn’t nearly as powerful as the Chargers, but nonetheless it’s impressive. Not only do the Jaguars come with an Optimal Team Health Score, but they have an Optimal Health Score in all four position categories.

Inside Injuries Prediction: The Chargers may still find a way to win this one, but bet on the Jaguars to cover, and take the under.

The Seahawks head into week 3 in decent shape, but no one can compete with the Falcons. Their Health Score is as good as it gets. The Falcons biggest advantages come with their offensive and defensive lines. They’ve been a confusing team so far, sometimes moving the ball well yet are unable to get Kyle Pitts involved. Some coaching decisions have been questionable, and they can’t seal the deal and win the game. The Seahawks have also been a bit confusing, stunning the Russell Wilson-led Broncos in week 1 and then looking pretty pathetic against the 49ers in week 2. This is a risky matchup to bet on, but the Falcons Health Score should drive your decision here.

Inside Injuries Prediction: The Falcons will win their first game of the season, so bet on them to cover. Take the over as these are two healthy offenses who do a decent job scoring.

This is a meeting between two teams who are pretty banged up. On the Cardinals side the health of James Conner is the biggest concern. The oft-injured running back wasn’t able to finish week 2 due to an ankle injury. It didn’t appear to be too serious, but it’s no guarantee he can go this weekend. If he does he won’t be 100%. Rondale Moore is also nursing a hamstring injury and seems unlikely to play. J.J. Watt missed week 2 with a calf injury and could return but comes with a High Injury Risk.

Somehow the Rams are in even worse shape than the Cardinals. Van Jefferson started off the week with a DNP, so it doesn’t look like he’s ready to make his season debut yet as he recovers from the knee injury. I also don’t trust Matthew Stafford, who had an offseason procedure on his elbow. They have tried to downplay the injury, but I see it affecting him on the field. Then there’s Cam Newton, who just doesn’t look like his pre-injury self. We warned before the season that Achilles ruptures are incredibly tough to come back from with the same level of explosiveness, especially as a running back. We’ve yet to see Akers prove that he can overcome it.

Inside Injuries Prediction: I think predicting who will win this one is a toss-up, but I’m taking the under all day. There are too many question marks on both of these offenses for them to reach 49 points.