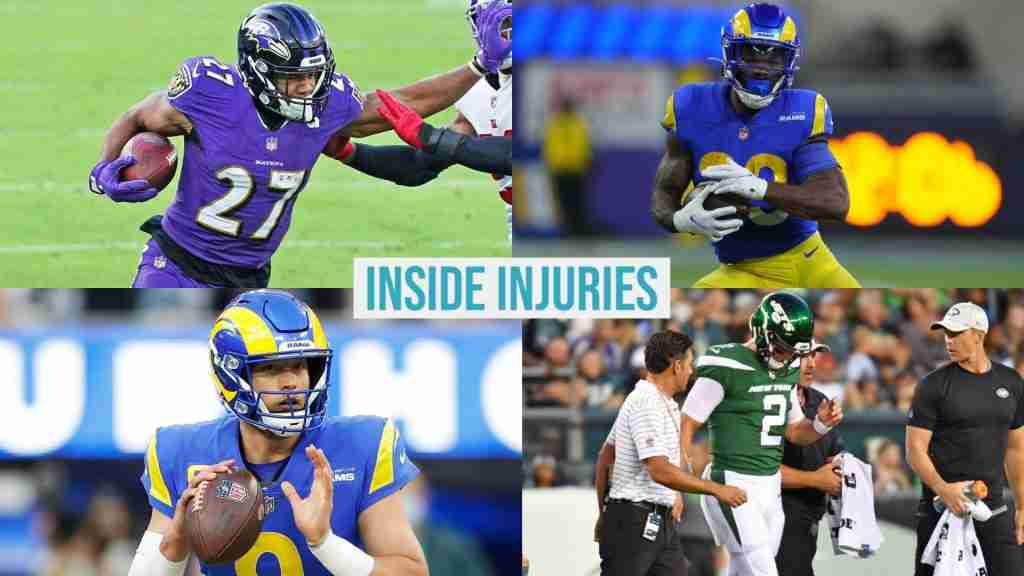 Inside Injuries is back and better than ever! This season we have more in-depth injury analysis specifically created for bettors. That means you’re more informed on how injuries will impact a matchup, and then you win more money!

The Jets come with a Poor Team Health Score heading into week 1, and Zach Wilson is a huge reason why. Without him this offense has very little upside. Wilson underwent surgery to trim a torn meniscus about three weeks ago, and the Jets announced that they are expecting him to be out until week 4. Long-term this is a smart move by the team, but it really hurts an already underwhelming Jets offense.

Meanwhile the Ravens start the year off in pretty good shape. The biggest concern is the health of their running backs, J.K. Dobbins and Gus Edwards, who continue their comebacks from torn ACL. Gus Edwards is on the reserve/PUP list and won’t be available yet. Meanwhile Dobbins is likely a few weeks away from playing, but he was not placed on the reserve/PUP list. The door is open for him to play in week 1, but I’m not expecting him to have much of a role if he does.

Inside Injuries prediction: Ravens will win by 10+ points, but take the under as the Jets offense won’t help out much here

The Bills kick off the season with one of the highest Team Health Scores, so it shouldn’t surprise you that we’re expecting to win this one over the reigning Super Bowl champs. Offensive lineman Tommy Doyle (foot) and TE Quintin Morris (hamstring) are both listed as questionable, but neither player is crucial to the overall performance of the team. Otherwise they’re in good shape.

The Rams are in quite the opposite position. It starts with their quarterback. Matthew Stafford is dealing with an undisclosed elbow injury. This doesn’t sound like all of the other injuries he has played through throughout his career as it’s one that is expected to linger throughout the season. You never want to see your quarterback have to manage an injury to their throwing elbow for that long. Then there’s Van Jefferson, who has already been ruled out with a knee injury. The running game is the biggest questions. Cam Akers and Darrell Henderson both missed time during training camp with soft tissue injuries to the lower body. Akers is the guy I’m more concerned about as he is a year removed from a torn Achilles.

I know everyone wants to believe that because Akers returned so quickly he’s going to prove that it’s possible to return to 100% following a ruptured Achilles, but a quick return doesn’t equal a return to the same level of play. I can’t stress this point enough. We haven’t ever seen a running back do it. I hope Akers is the first as he was elite and has age on his side, but we can’t expect him to do it just because he says he feels good.

Inside Injuries prediction: It will be close, but the Bills will win this one by a touchdown. The over/under is pretty high at 53 points, so I’m taking the under, especially considering the health of the Rams skill players.

The Eagles have some good and bad news heading into week 1. Miles Sanders, who has been battling a hamstring injury throughout training camp, was a full participant at practice Wednesday and is expected to be ready to go. Hamstring strains are highly recurrent and can affect explosiveness, so our algorithm has given him a Health Score of 7 for week 1.

On the defensive side DE Derek Barnett (rib), DT Javon Hargrave (toe) CB Josiah Scott (hamstring) were all limited to start the week off. According to our algorithm, the most concerning area for the Eagles is their secondary (that group comes with a Poor Health Score).

The Lions key players will start the season in good health. There isn’t a huge gap between the Lions and Eagles overall health, but the Eagles should perform at a higher level.

Inside Injuries prediction: The Eagles will win, but barely (by a field goal or less)

The Titans will finally get a healthy Derrick Henry back after he missed the second half of last season with a Jones fracture. Henry returned in the playoffs but didn’t look like himself. Heading into week 1 he is going to be the healthiest and freshest of all season. His foot fracture could easily have been an overuse injury after the Titans road him to the ground for years. Henry is also in his late 20s now, which is when running backs start to experience a decline. I’m expecting him to have a solid start to the season, but he won’t be a top back throughout the entire season.

The biggest concern for the Titans is their defensive secondary. Our algorithm has them in the Moderate category with a 3.33 Health Score.

Then there’s the Giants, who are in worse shape according to our analysis. Sterling Shepard continues to work his way back from a torn Achilles and can’t be expected to contribute much early on in the season. Shepard, OLB Kayvon Thibodeaux (Knee), OLB Azeez Ojulari (Calf), and S Dane Belton (Clavicle) were all limited to start off the week.

Inside Injuries prediction: The Titans will win by a touchdown

Inside Injuries’ subscribers gain access to Health Scores for every single player, team and matchup! Don’t miss out this season. Subscribe today!