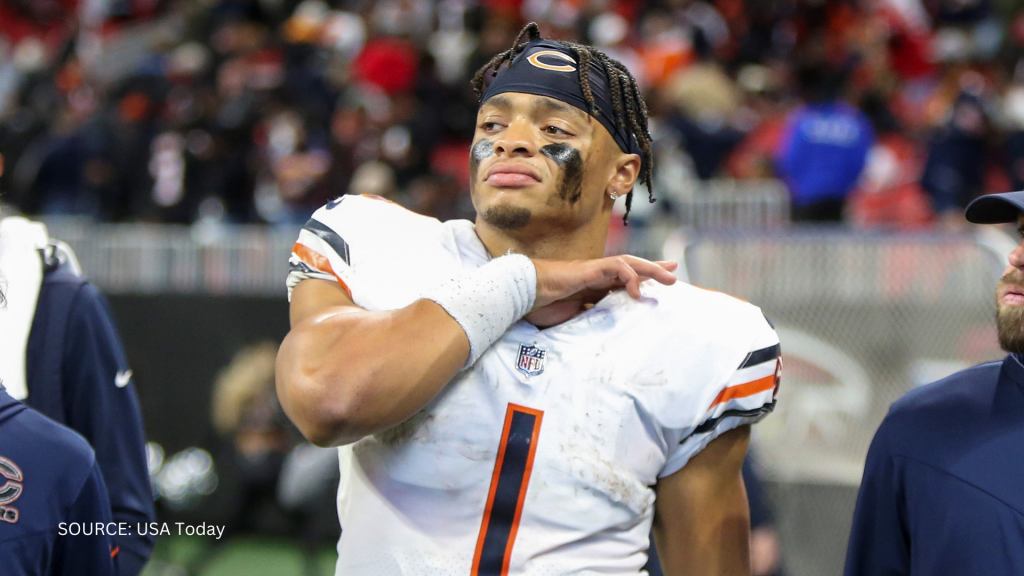 Bears’ QB Justin Fields suffered a left shoulder injury during Chicago’s Week 11 loss to Atlanta. Reports are conflicting about whether it is a dislocation or a separation (AC sprain).

Fields has strung together a series of quality starts, and – though it was a loss – Sunday’s game wasn’t any different. He threw for 153 yards with one touchdown and one interception, while picking up another 85 yards and a touchdown on the ground.

After the game, Fields was seen favoring his right shoulder and the team confirmed he had suffered the injury on the first play of the final Bears drive. He underwent an MRI on Monday to evaluate the extent of the damage. The results of the MRI aren’t known at this time, but head coach Matt Eberflus said Fields will be considered day-to-day until Wednesday. He also added “We have not ruled [a season-ending injury] out at this point. We’ll see where it is on Wednesday.”

Dislocations are considered the more severe of the two. When the ball of the humerus is forced out of the socket there is often additional damage to the surrounding structures, notably the rotator cuff and labrum. Surgery is an option in these scenarios, however most players can push through the damage and wait until the offseason if they need surgery. Fields, since it’s not in his throwing shoulder, could pursue this path if it’s a dislocation.

Separations are less severe and often don’t require surgery. Players will – most of the time – wear a brace and return in a few weeks without the risk of doing any additional damage to the joint or its surrounding structures.

Our algorithm predicts this is a Grade 2 shoulder injury for Fields. Because these injuries are so painful and can be easily aggravated if not given a week or two to heal we’ve calculated his Injury Risk to be 37%, which is High. His Health Performance Factor – since the injury isn’t in his throwing shoulder – is better, at 63%. That is still considered Below Average by our algorithm.

His Optimal Recovery Time will be 27 days and, considering the Bears’ record, they shouldn’t rush him back. I am optimistic that this is an AC sprain and not a dislocation, which means he should be cleared to return sooner. A key factor in returning to play will be pain management, so don’t be surprised if he misses a game. If he does play in the next month (and I expect him to), avoiding big hits and hard falls to that side, especially with an outstretched arm, will be crucial if he is going to survive the game.