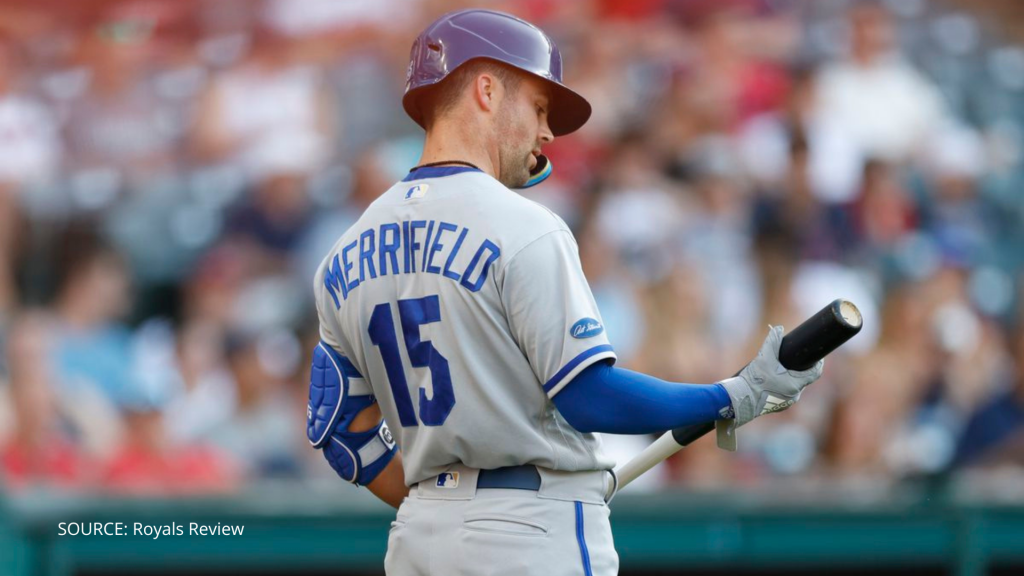 Royals 2B/OF Whit Merrifield’s streak of 553 consecutive games played will come to an end tonight. The 33 year old is dealing with a bone bruise and swelling to a ligament in his right big toe, an injury he suffered in yesterday’s game against Cleveland.

Merrifield’s streak ranks 25th on MLB’s all-time consecutive games played list, and is a testament to his preparation and durability. About the streak, he said: “It’s going to be unfortunate that it had to happen this way. But I’ve been…lucky is a good word for it in some instances. But I’ve put myself in a good position to play every day physically. Mentality-wise, I’ve shown up ready to play no matter the circumstance whether I was going good or bad.

“It’s been a long run. I’m proud of it. I’m not sure it will be touched anytime soon by someone that plays the way I play it. Maybe like a DH or a first baseman. But to bounce around, play multiple positions, run, steal bases, play in the weather that KC has to offer. I’m pretty proud of the number I put up.”

He should be, too. 553 games is the equivalent of playing almost three and a half seasons. The next closest player is Atlanta’s Matt Olson, who has played in 221 straight games.

Merrifield added that he doesn’t feel confident in playing because the injury is in his right foot, which – as a right-handed hitter – he uses to load and push off when he swings. The injury occured in the top of the fourth, when Guardians’ 2B Owen Miller fouled a ball deep down the right field line. Merrifield, who was in right, broke on the ball as it drifted out of play. It was at that moment he felt a “pop.” The pain never subsided, and he was removed in the top of the fifth.

“If it was my left foot, it would be a little different,” Merrifield said. “I think I’d be able to manage it if it was my plant foot. But it’s my load foot. Hitting, you want a lot of weight on your backside. Try pushing off your backside while you’ve got a big toe that’s bothering you.

“I don’t see it being beneficial for anything that has to do with my swing. It’s going to take away bat speed. It’s going to make me fall and just put me in a bad position that, frankly, could create some bad habits. I’m finally getting good habits. I don’t want to go back to bad habits.”

Merrifield – who is a career .286 hitter – knows what he’s talking about. Hitting is generally broken down into three phases (some analytics break it into six, though): load, launch, and follow through. The load phase is what initiates the swing and generates the power needed to drive the ball. It is called the load phase because the hitter shifts their weight towards their back foot, essentially loading weight towards the rear. If the load foot is injured, hitters will have issues with timing and power.

He is also a menace on the base paths, with 14 stolen bases this season and 173 in his career. Any lower body injury is going to limit his running ability.

Bone bruises occur when blood vessels within the bone are damaged, causing blood and additional fluid to leak into the bone and the surrounding area. They are less severe than fractures, but still heal slowly, often over the course of one to two months.

In Merrifield’s case, team doctors – according to him – told him he should wear the walking boot for the next few weeks and he’d feel pain and discomfort for five to six weeks. He’s optimistic he will return for the Royals’ first series after the All-Star break, which would put his return in two weeks on July 22.