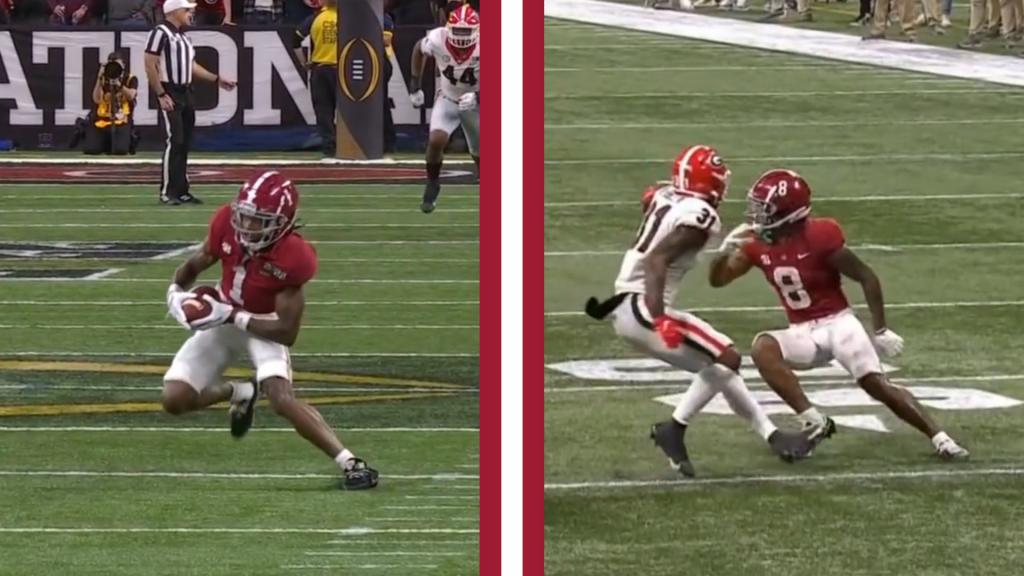 Two of the biggest storylines of this year’s NFL draft are the ACL injuries to Jameson Williams and John Metchie. Before we get into the specifics of their injuries, let’s first dive deeper into ACL reconstruction and return to play.

The ACL, anterior cruciate ligament, is one of four knee ligaments. The others are the LCL, MCL and PCL. The ACL runs through the middle of the knee and connects the femur (upper leg thigh bone) to the tibia (shinbone), preventing it from sliding too far forward. When the ACL is damaged, it’s rare that it’s only a very small tear. Most ACL injuries are a complete rupture, or close to it. That means surgery as this ligament won’t heal on its own.

There are a few surgical options, but most athletes will have a piece of their own tissue (called an autograft, coming from the patient’s own body) used to create the new replacement ligament. That means cutting a piece of the hamstring or patellar tendon to use as the graft. The type of graft used will have an impact on the early stages of recovery, and some athletes will also battle minor problems to the graft site. Patellar tendonitis or pain to the hamstring tendon are possible.

Aa variety of factors impact the rehab process. One big variable is additional damage to the knee. The recovery is more straightforward if there isn’t any additional damage, which can include other ligaments or the meniscus. For example, damage to the MCL can mean delayed surgery to allow it to heal first. If there is a meniscus tear that needs to be repaired then the athlete may need to have a longer no weight-bearing period following surgery. These are just a few examples of many differentiators following ACL repair.

The early focus is on strengthening the surrounding muscles and stretching out the new ligament. Getting full range of motion back can be very frustrating as it’s a slow and painful process. It’s crucial to a successful recovery, but a very delicate balance. Doing too much can mean the graft will detach as the new tissue hasn’t had time to integrate into the body.

So what does a typical timeline look like for an NFL player? Of course it depends on a variety of factors (some mentioned above), but a standard recovery with no complications or setbacks looks something like this (keep in mind the timeline needs to be viewed from the surgery date, NOT the injury date):

4-6 months: workouts can increase in intensity with the athlete going full speed, but contact needs to be avoided and workouts closely monitored

9 months: Even though ACL recoveries have come a long way, athletes absolutely should not return to the field before hitting this mark – even if the knee is feeling strong and stable, that new ligament needs time to integrate, the rate of re-tear is incredibly high before 9 months

12-18 months: this is when the athlete should be approaching 100%. We often forget that it isn’t just the new knee ligament that needs time to fully attach in the joint. The surrounding muscles go through a lot during surgery, and muscle atrophy is significant following the procedure. There’s no way to avoid this, and it won’t get back to full strength with a few months of work. If the muscles aren’t strong and balanced, then there is an increased risk of re-injuring the knee or suffering a new injury such as a hamstring strain.

So what does this mean for guys returning from a torn ACL? Here are our projections:

Jameson Williams: Williams was once viewed as the top WR in this year’s draft, and maybe he still is, but he won’t be 100% for the 2022 season. He suffered a torn left ACL on January 10th in the National Championship game. Now three months pot-op there have been videos circulating that show Williams sprinting and going through agility drills. Of course it’s great to see this, but he is nowhere near ready to play football. While Williams is hoping to be ready to go week 1, he shouldn’t be cleared until late October. Even then he won’t be the same explosive player we saw at Alabama. If the team that drafts him handles his injury correctly he will wait to make his NFL debut until the second half of the season, and then in 2023 he will be healthy and ready to go.

Williams said at the NFL combine in early March that he was given a 5-7 month recovery timetable and that he was told he was ahead of schedule. This just isn’t realistic. Williams may feel great right now, but his knee needs time. It isn’t worth risking an even more severe injury that could impact his career just so he can get back out there a few months sooner. It’s crucial to hit the nine month mark, no matter how great he feels.

John Metchie: Like Williams, Metchie is making solid progress from his torn left ACL and hopes to be ready to play in week 1. That shouldn’t happen, though. Metchie is slightly ahead of Williams in his recovery as he was injured in the SEC Championship in December. Metchie doesn’t come with the same upside and will likely be a second or third round pick. That makes him a less risky draft pick, though.

At the NFL Draft Combine Metchie said that he expects to be cleared by June. Again, this is way too fast. That would only be six months post-surgery. He may be able to participate in some individual drills at rookie camp and by training camp, but he shouldn’t be participating in any contact drills. ACL surgeries have come a long way, and Metchie can have a great NFL career, but he needs to be patient.

George Pickens: Pickens is just over a year removed from right knee surgery for a torn ACL. It was confirmed to be an isolated tear, so there was no additional damage. Pickens made his season debut eight months later but didn’t have much of an impact throughout UGA’s Championship run. He appeared in five games, collecting five receptions for 107 yards. The underwhelming stats shouldn’t come as a surprise. I’m expecting much bigger things from Pickens in his rookie season. He will be 18 months removed from ACL surgery and should be feeling much stronger.

Pickens is projected to be an early second round pick, and this makes sense based on his Injury Risk going forward.