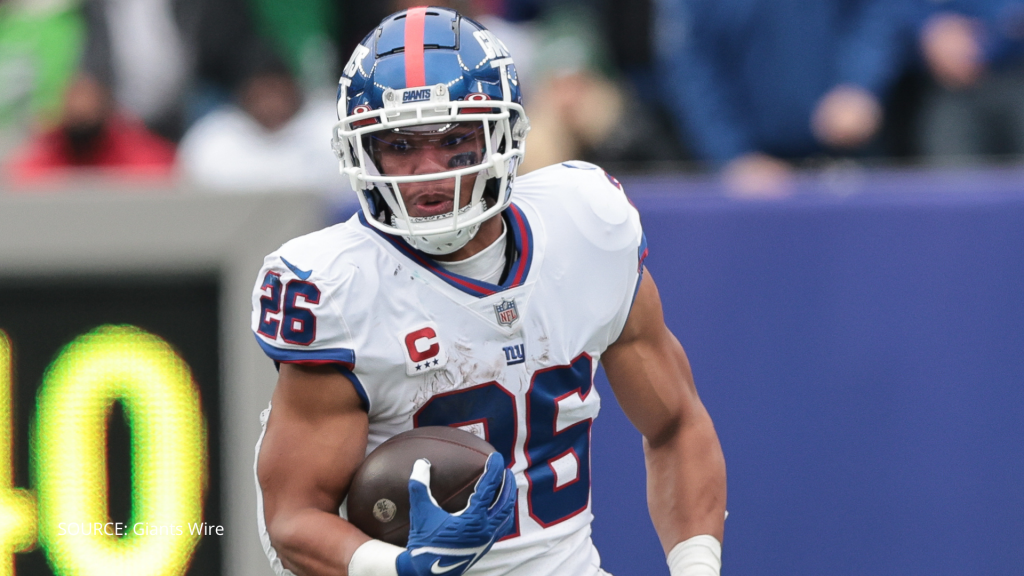 Giants RB Saquon Barkley has the opportunity to prove his doubters wrong this season, but for that to happen, a lot needs to go right. His 2018 rookie season was electrifying, and made the Giants front office look smart for taking a running back with the second overall pick. That year, he put up 1,307 rushing yards while totalling 2,028 from scrimmage, leading the league.

But a series of injuries has slowed Barkley down since then. In 2019 it was a high ankle sprain, in 2020 it was a torn ACL/MCL/meniscus, and in 2021 it was a low ankle sprain. Removing his lost 2020 season from the equation, Barkley has shown steady signs of declining production since his rookie year, which is where the critics come into play. He hasn’t matched his rookie numbers yet, and hardly came close in his second season, which was twice as productive as his fourth season. Not good.

This year, things have the potential to be different. At the end of last season, Barkley appeared to regain his lethal combo of speed, agility, and strength. Against the Bears, he totalled 102 yards on 21 carries. It was his only game of the season where he eclipsed both 20 carries and 100 yards. Yes, it was against the 9th-worst rushing defense, but the performance was a good sign nonetheless.

Barkley will benefit from a new head coach and bolstered offensive line this season, which could unlock the fire that was in him four years ago. His physical tools are still off the charts, and he remains one of the elite pass-catching backs in the league. During his four seasons in the NFL, Barkley has accumulated 2,937 yards and 19 touchdowns on the ground and has also caught 190 passes for 1,482 yards and another eight touchdowns.

Last season, he ranked #26 in the NFL with 162 carries but totaled 593 yards which was #38 in the league, and his 856 yards from scrimmage ranked #69 among qualifying players. Those numbers don’t jump off the page for a guy with his skillset – or anyone for that matter – but he did flash that skill set by ranking #24 in both total yards created and broken and evaded tackles. His receiving stats aren’t bad either, with him seeing a 13.3% target share on 238 routes run and 263 yards and two touchdowns on 41 receptions. His usage was also relatively good, with him being on the field for 61.1% of snaps.

This will be a make or break season for Barkley. New York has struggled mightily since 2016 when they lost in the Wild Card round to the Packers. They’ve lost 10+ games in every season that followed, leading to a regime change in the offseason. It’s safe to assume the new staff wants to get the most out of Barkley that they can, so I’d expect his usage rate to remain the same or increase this year. The question is if the offense as a unit can get it together.

Health & Draft Analysis – Barkley was once a clear top 5 RB option, but injuries have been a problem throughout his career, highlighted by a 2020 torn ACL. While that should be behind him, he has had serious injuries to both ankles. I am expecting Barkley to look better this year considering he is two years removed from the torn ACL, which is when we typically see players get back to 100%. He’s a solid option late in the second round.