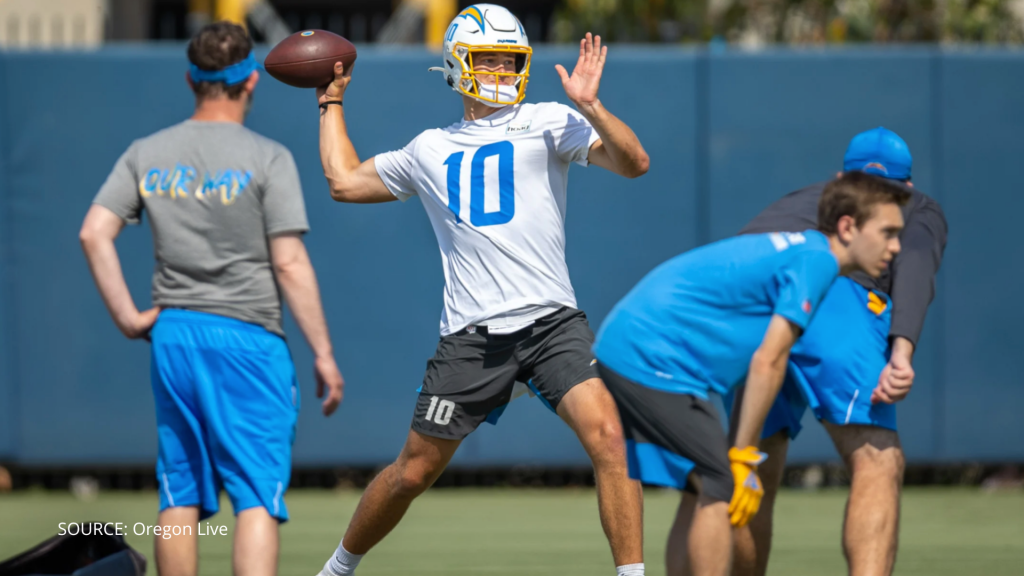 Chargers QB Justin Herbert has quickly ascended the ranks of quarterback stardom in just two seasons. Along that path, he has rejuvenated a franchise whose fans have long wondered when it was their chance to compete. Heading into 2022, this very well could be the year.

As a rookie in 2020, Herbert had stiff quarterback competition in his class. Joe Burrow was taken #1 overall by the Bengals and was the odds on favorite to win OROY after putting on arguably the best statistical season by a quarterback in college history. Next up was Alabama standout Tua Tagovailoa, a lefty who led the Crimson Tide to a second-half comeback win in the 2018 National Championship as a true freshman. He was picked by the Dolphins at #5.

Next up was Herbert, who the Chargers quickly grabbed at #6 overall to replace longtime fan favorite Phillip Rivers. He got his first start in Week 2 against the Chiefs, and despite losing a close game, Herbert flashed his elite arm strength and pure athleticism. He would go on to win Offensive Rookie of the Year over Justin Jefferson, while breaking the record for most passing touchdowns by a rookie quarterback (31) to go with a handful of other rookie records.

Amongst QBs, he totaled the third most red zone carries (23) to cap off a 310 yard season on the ground, which ranked tenth at the position.

Health & Draft Analysis – Herbert is going to finish at or near the top of the most statistically significant categories in 2022 much like he did in 2021. He has a stronger offensive line, and receiving weapons Keenan Allen, Mike Williams, and Austin Ekeler have all returned.

The team also added TE Gerald Everett, who was productive for the Rams and Seahawks, but isn’t necessarily a game changer. The big thing will be the offensive line, as well as Herbert himself getting smarter and stronger. I think he’s worth a third round pick for sure. If you wait until the fourth, he might not be around.