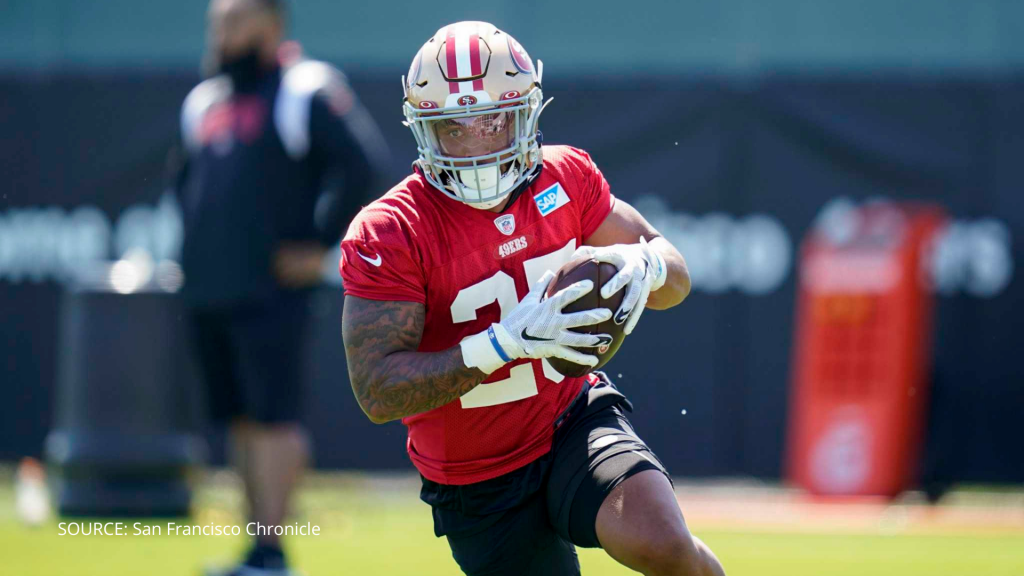 San Francisco RB Elijah Mitchell was one of the 2021 NFL season’s biggest surprises. A 6th round pick out of Louisiana-Lafayette, Mitchell was supposed to be the Niners third-string option. But in Week 1 against the Lions, he put the team on notice by racking up 104 yards on 19 attempts, averaging 5.4 yards per carry.

He was named the starter for Week 2, but couldn’t match his earlier performance, tallying just 42 yards on the ground. He was diagnosed with a shoulder strain after the game and was inactive for Weeks 3 and 4 before returning to the starting lineup in Week 5. Over the next five games, Mitchell averaged 82.8 yards per game and 5.15 yards per carry.

He would go on to miss four of San Francisco’s next eight games due injuries, including a rib injury, a knee sprain, a fractured finger, and a concussion. He returned in the playoffs, helping the Niners secure wins over both Dallas and Green Bay before ultimately losing to the Rams.

Mitchell’s season end numbers were solid, but he will have to prove he isn’t just a one-hit wonder in 2022. Among running backs, this is how he stacked up in a few of significant categories:

He didn’t finish in the Top 25 in red zone touches, total touchdowns, or yards created, but that is likely to change this year since he is the easy choice for RB1 in San Francisco (if he stays healthy). When it comes to receiving, he averaged 11.3 routes run per game and had no drops, but didn’t see much action (7.0% target share).

Health & Draft Analysis – Mitchell is a solid back with a short track record and still a lot to prove. Unfortunately, he will also be competing with Trey Lance, who is also looking to prove himself. Lance is a scrambling quarterback, which could eat into Mitchell’s opportunities (think Jalen Hurts and Miles Sanders).

On top of that, his injury history doesn’t look great on paper. Our algorithm gives him an Elevated Injury Risk, but his Health Performance Factor is Peak. Mitchell is going to be a solid option for your RB2. I would pick him up somewhere in the sixth round.