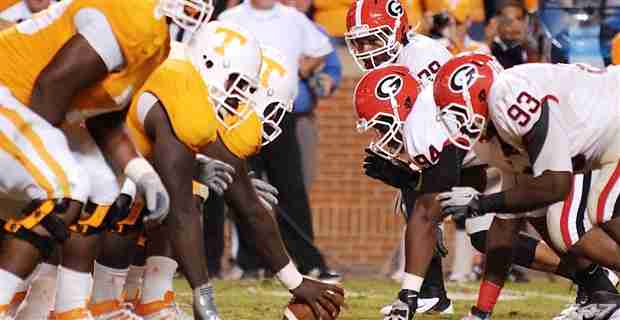 People are calling this weekend’s Georgia v. Tennessee matchup a “Game of the Century,” but are both teams really going to be playing at their full potential?  With Georgia sitting at the top of the rankings at No. 1, Tennessee is nipping at their heels at No. 2 with a few big wins, including a win over Alabama. Both teams are playing at an elite level and both teams are currently undefeated. So why wouldn’t they bring 100% to this game?

The biggest loss for Georgia is their leading pass rusher Nolan Smith. He tore his pectoral muscle during the first quarter of last week’s game against Florida. An MRI confirmed the tear and Smith underwent surgery on Thursday to repair the tear. Unfortunately, that injury put him out for the remainder of the season. Also missing from Georgia’s lineup is DB Dan Jackson who suffered a stress fracture in his foot and will be out for the remainder of the year.

Luckily, DB Chaz Chambliss, who had been dealing with a hamstring injury, was able to notch a sack while filling in for Smith last week. Chambliss appears to be back to full healthy, which Georgia’s secondary will absolutely need against Tennessee. DT Jalen Carter, another huge part of Georgia’s defense, also appears to be fully recovered from a knee injury he suffered earlier in the season. He is technically listed as “probable” against Tennessee, but we think there is a very good chance he is out there on Saturday. Having both of these players healthy is going to be key if UGA expects to put a stop to Tennessee’s fast paced offense.

On offense, Georgia is faring a little bit better, but there are still a few injury concerns. If WR Adonai Mitchell is able to return from the high ankle sprain he suffered the second game of the season, that would be a huge lift for Georgia’s offense. Mitchell did not play in the past two games against Florida or Vanderbilt and saw just three snaps against Auburn (Oct. 8) since suffering the injury against Samford. It’s been 6 weeks since the initial injury and we are betting he aggravated it during the Samford game. This will be week 3 since the suspected aggravation, which is under the 4 week timeline we like to see with ankle sprains, but it is still possible that Mitchell could be effective if he is out there. Running back Kendall Milton did not play in the win over Florida last week, and he is currently questionable with a quad injury. He was able to practice with the team this week, which says he is trending in the right direction.

OT Amarius Mims is considered questionable against Tennessee with an MCL injury he sustained late in last week’s win over Florida. Head Coach Kirby Smart indicated that Mims had not practiced with the team this week but had been able to do individual work on the side.

Starting left guard Xavier Truss, who was limited to half the snaps against Florida on account of turf toe, will likely play against Tennessee, though Smart admitted that the guard is “banged up.”

With regards to Tennessee’s injuries, there isn’t much to report. Not much has come out of the organization this week leading up to the much anticipated matchup, but there are a few players that we know have been dealing with lingering injuries.

One of the most impactful injuries has to be WR Cedric Tillman’s high ankle sprain. Tillman returned to action last week, 6 weeks removed from the tightrope surgery he underwent to help speed up the recovery process for his high ankle sprain. He was on a pitch count against Kentucky, but it seems like he will be a full go against Georgia.

As long as Tennessee’s offense, namely QB Hendon Hooker and star wideout Jalin Hyatt, can keep healthy, Tennessee has a real shot at putting up big numbers against Georgia’s injured defense. Tennessee’s offensive line is currently in good health as well, and their ability to protect Hooker is part of what has made this offense nearly unstoppable. Georgia’s injury concerns are making this already close game a true toss up.