Achilles ruptures: 3 RB’s and their future 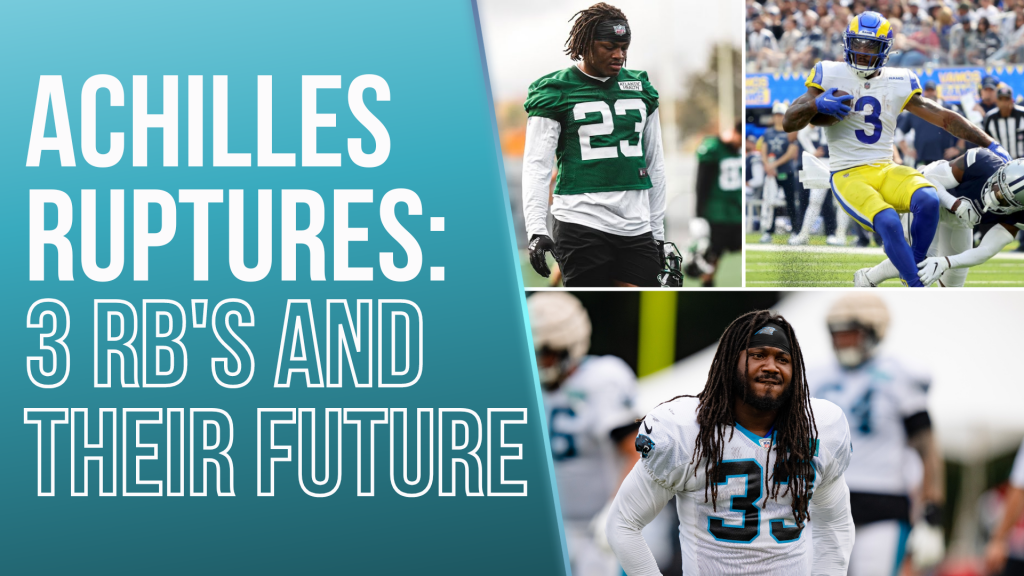 An Achilles rupture is one of the worst injuries an NFL player can suffer. Generous estimates suggest just over 70% of players who had surgery to repair a ruptured Achilles managed to return to the field, meaning roughly 30% of players never touched the field again. Specifically, running backs were the most impacted. The NFL themselves published their findings about the injury in 2013, saying “our research concludes that no running back has ever recaptured sustained pre-injury form after rupturing an Achilles tendon.”

So what is an Achilles rupture, why are they so impactful, and who are some players who returned to the field?

What is an Achilles rupture?

The Achilles tendon is a strong band of connective tissue that connects the muscles in the back of the calf – gastrocnemius, soleus and plantaris – to the heel bone (calcaneus). It also helps lift the calcaneus up off the ground, meaning it is instrumental in walking, jumping, sprinting, and any other action that involves the weight of the body shifting to the toes. When it gets overstretched, it can tear (rupture) partially, or completely.

Ruptures typically occur within 2.5 inches of where the tendon attaches to the calcaneus. This is because blood flow is poor in that area, which also impacts heal times. While the cause of ruptures can vary – from planting your foot and trying to drive forward aggressively, to simply stepping off a curb – the mechanism is often the same: a sudden increase in mechanical stress.

What makes an Achilles rupture so impactful?

To understand what makes Achilles ruptures so impactful and difficult to return from, we need to pick out a few pieces of information on the Achilles itself. First, it’s function.

The other piece of information we need to look at is where these ruptures usually occur: in a location with poor blood supply. The Achilles itself doesn’t have the best blood supply (despite being the largest and strongest tendons in the body), making it already predisposed to injury. Add in a portion of the tendon (2.5 inches from the heel) that gets even worse blood supply and you have a recipe for disaster.

On top of that, the poor blood supply means slower healing times (9-12 months) which then raises the risk of re-injury. As a result, players across almost every sport struggle to return from Achilles ruptures.

The three players we’re going to look at in the NFL who recently returned from Achilles injuries are: James Robinson, Cam Akers, D’Onta Foreman.

Against the New York Jets in Week 16 of the 2021 season, Robinson ruptured his achilles in the first quarter. He finished the year with 767 rushing yards and eight touchdowns through 14 games. He spent the offseason rehabbing and the Jaguars said they didn’t want to rush him back onto the field, but he managed to return ahead of Week 1.

Against the Commanders, Robinson had his best game since Week 5 of the 2021 season. He totaled 11 attempts for 66 yards and touchdown, to go with one reception for three yards and a touchdown. He then had a solid Week 2 before going off for 100 yards and a touchdown on 17 carries in Week 3. Unfortunately, the string of good games would end there.

Since then, Robinson has managed just 127 yards on the ground, averaging 3.6 yards per carry. He’s reportedly battled knee issues behind the scenes, but he hasn’t missed a game. Instead, he just hasn’t looked the same.

Our Injury Risk has been High for him all season, so the Jaguars deserve a lot of credit for how they’ve handled his injury. That being said, though, his recent knee issues raise red flags. His current Injury Risk is 32%, which is considered High. Essentially that means Robinson has a chance to get injured on 32% of the snaps he is active in.

His Health Health Performance Factor is bordering on Poor, but is considered Below Average at 43%. That means his injury is limiting him by 57% (100% – 57% = 43%). With his current injury, we anticipate he will be ready for Week 9 when the Jets host the Bills, but expect him to see limited touches.

The situation currently going on in Los Angeles surrounding Cam Akers is unfortunate, but let’s circle back to over one year ago to understand how it got this way. Akers tore his Achilles during offseason workouts in July of 2021. Since we know it takes an average of 9-12 months to heal, it was shocking that he managed to return in less than six months, joining the eventual Super Bowl champion Rams in the playoffs.

It was a recovery no one expected and everyone praised, so much so it was deemed miraculous by some. But when he came back he didn’t look the same. After averaging 4.3 yards per attempt in his rookie season, Akers managed just 2.4 in the five games he played in 2021.

So far in 2022, not much has changed. In Week 1 against the Bills, Akers totaled three attempts and zero yards, prompting head coach Sean McVay to say after the game that he wished Akers would play with more “urgency.”

Akers didn’t exactly support the statement’s message, however he acknowledged the coaching staff’s decision, saying “Whatever coach says, man, I’m going to take it and learn from it […] and go from there whether I think it’s right or not.”

In the four games he’s played since making that statement, Akers has managed just 48 attempts for 151 yards and one touchdown. His season-high came in Week 3 against the Cardinals, when he put up 61 yards and a touchdown on 12 carries. But after Weeks 4 and 5, Akers decided to step away from the team, and he hasn’t practiced with them since.

The belief is that the Rams and Akers have fundamental disagreements on how he should be used and his attitude surrounding that. It’s clear that he isn’t the same running back that averaged 4.3 yards per carry in 2020, and whether Akers is looking for more understanding from the Rams that he isn’t 100%, or the Rams want Akers to push himself harder is unknown. What is known is that his ruptured Achilles has changed his mentality and success on the field.

Our algorithm has his current Injury Risk at 20%, which is High but bordering on Elevated. His Health Performance Factor is in much better shape, at 82%, which is considered Peak.

There is some good news surrounding Akers. He wasn’t traded at the deadline and did participate in Thursday’s team walkthrough. The hope is that he and the Rams can resolve their differences as he continues to work back from injury. His absence has also given him additional time to rest the Achilles, meaning he could be trending towards a solid return, like the next player on this list.

D’Onta Foreman entered the league in 2017, so he is the player with the most experience on this short list. He wasn’t the starter for Houston, and only saw double-digit carries four times, including in Week 11. That would prove to be his best game of the year, with 10 carries for 65 yards and his first two career touchdowns.

His best play was also his last of the season. On a 34-yard touchdown run, Foreman suffered a non-contact Achilles rupture at the two-yard line and fell into the end zone and immediately grabbed his lower leg. He finished his rookie season with 78 carries for 327 yards (4.19 yards per carry) and two touchdowns to go with six receptions for 83 yards in 10 games and one start.

Foreman would end up missing the first 15 weeks of the 2018 season as he recovered. He appeared in just one game – Week 16 at Philadelphia – and didn’t look good. He carried the ball seven times for -1 yards. He got active in the passing game as well, with two receptions for 28 yards and a touchdown.

He went on to miss the 2019 season due to a torn bicep and bounced around before landing with the Titans in 2020. Initially he was a member of the practice squad but he was elevated to the active roster in Week 8 to be Derrick Henry’s backup. In six games with Tennessee, Foreman ran the ball 22 times for 95 yards, averaging 4.32 yards per carry.

After a brief stop in Atlanta, he returned to the Titans in 2021, and continued to look good in the backup role. During Week 12 against the New England Patriots, Foreman rushed 19 times for 109 yards in the 36–13 road loss. Three weeks later against Pittsburgh, he carried the ball 22 times for 108 yards, and two weeks after that – against the Miami Dolphins – he rushed 26 times for 132 yards and a touchdown. He finished the season with 133 carries for 566 yards and three touchdowns to go with nine receptions for 123 receiving yards in nine games.

Foreman played a major role in Tennessee’s success that season, especially after they lost Derrick Henry to injury in Week 8. He went on to sign a one-year contract with the Carolina Panthers in the 2022 offseason to backup Christian McCaffrey. After he was traded, Foreman picked up where he left off. In Week 7, against the Tampa Bay Buccaneers, Foreman had 15 carries for 118 yards. The following week, against the Atlanta Falcons, he had 26 carries for 118 rushing yards and three rushing touchdowns.

Foreman’s Injury Risk is still Elevated (10%), but his Health Performance Factor is Peak (86%). But there is no indication that his Achilles is still an issue. He should only continue to perform each week.

Of the three running backs, Foreman is the only one to return to pre-injury levels of success. He is also the player who’s spent the most time in the league, as well as rehabbing his Achilles. The additional year he missed with the torn bicep offered him more time to let the tendon heal, which put him in a good spot to succeed – or at the very least compete for a roster spot – in 2020.

Robinson and Akers are both young, so time is on their side, but they need to focus on load management in the short term as the Achilles continues to heal and they learn to trust it again.