5 Sleeper Wide Receivers Who Are Worth a Second Look 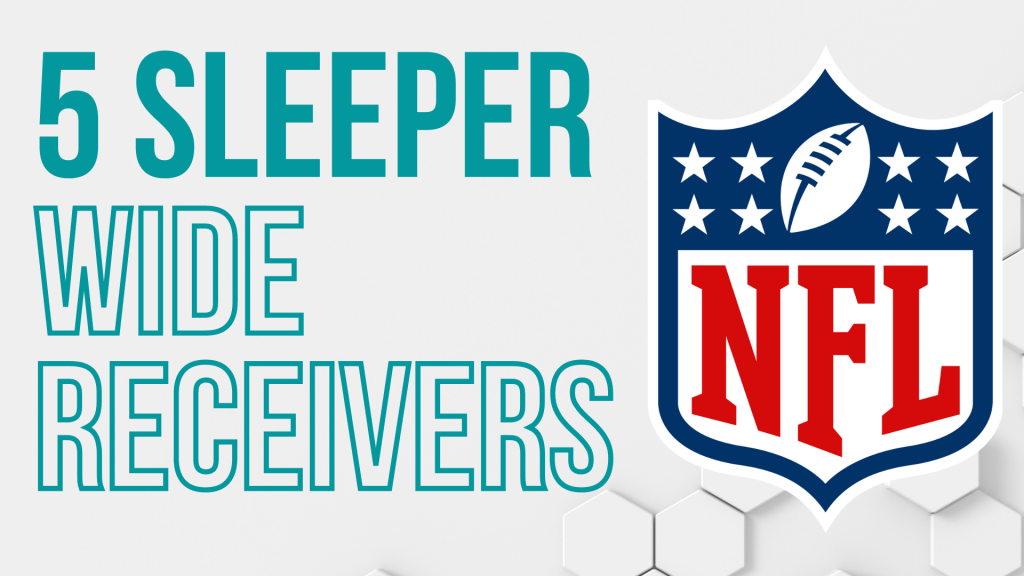 There’s no better feeling in fantasy football than picking up a late round pick who plays way above their ADP. For example, Ja’Marr Chase was WR29 heading into last season. He went on to finish the season as WR4. So that got us thinking, who are some wide receivers this year who can be sleepers based on their ADP?

Returning Saints WR Michael Thomas has his fair share of doubters for a guy who led the league in receptions in back-to-back seasons. Some of the concern is valid. He has missed extensive time due to a series of ankle injuries and delayed his surgery to the point he ended up sitting out 2021. Even our algorithm still gives him an Elevated Injury Risk (22%) and a Below Average Health Performance Factor (52%).

But those in New Orleans believe he is likely to return to form this year. Highlights and reports have been flying out of training camp reinforcing that belief. First year head coach Dennis Allen went on the record, saying: “When I watch Michael Thomas at practice, I see the Michael Thomas that I saw pre-injury. I see a big, strong, physical, receiver that makes a ton of contested catches. I saw it in these practices. I see a guy that looks pretty good,”

Before his injury, Thomas was an elite, game-changing receiver who set a myriad of records. In four full seasons, he led the league in receptions twice, hauled in 470 receptions for 5,512 yards, found the endzone 32 times, made it to three Pro Bowls, earned two All Pro selections, and won Offensive Player of the Year. He established himself as one of the most reliable targets in the league, catching passes over defenders and in airtight windows. In short, he earned his nickname: Can’t Guard Mike.

Why He is a Sleeper – Thomas’ current ADP is hovering in the mid-50s, and his position ranking is anywhere between WR20 and WR30. It would take a lot, but he could be WR1 at the end of the year. Jameis Winston can sling the ball, too, which will give Thomas ample targets. If he manages his ankle well, he is going to be a steal.

Broncos country, let’s ride. Third-year WR Jerry Jeudy is poised for a breakout season with a new QB under center. If you are hesitant to believe that, I would understand considering last season was supposed to be his breakout season. In his defense, he battled a handful of injuries as well as a lackluster passing attack that ranked 19th at the end of the year.

In 10 games, Jeudy finished the season with a 19.9% target share despite being on the field for a meager 64.5% of Denver’s snaps. That limited action resulted in 232 routes ran, 38 receptions, 467 yards, and zero touchdowns.

Those aren’t good numbers, there’s no doubting that. But there’s also no doubting his athleticism, skillset, and potential. Pairing that with notorious gunslinger Russell Wilson is a match made in heaven on paper. Wilson has averaged 3,705 passing yards and 29 passing touchdowns per season since entering the league in 2012 and has consistently finished among the Top 10 QBs in fantasy scoring.

Jeudy will also benefit from the unfortunate ACL tear suffered by teammate and fellow WR Tim Patrick earlier this week.

Why He is a Sleeper – Russell Wilson is an immediate upgrade in Denver. In five of his 10 seasons with Seattle – including the last three – Wilson’s top receiver had 1,000+ yards. Two other seasons, his top receiver fell just short with 960+ yards. That certainly bodes well for Jeudy considering his only competition for WR1 is Courtland Sutton. Wilson has also shown an affinity for young and athletic receivers, namely Tyler Lockett and D.K. Metcalf.

Jeudy’s ADP is in the mid-60s, and is a consensus late-20s wide receiver.

The name that gets brought up as a consistently underrated receiver still remains underrated. In six of his eight seasons, Cooks has finished with 1,000+ receiving yards. Those seasons have come with quite the variety in quarterback talent, including Tom Brady, Drew Brees, Jared Goff, and Davis Mills.

Mills is the most recent and will be the QB throwing to Cooks again this year. He took over for the Texans last year as a rookie and struggled out of the gate but managed to find his groove towards the end of the year. Part of that success was him building chemistry with Cooks, who finished the year with four 100+ receiving yard games and a career-high 134 targets and 90 receptions.

Cooks is the easy choice for WR1 in Houston and is likely to see another 125+ targets this year. His other metrics from last season should carry over as well. He saw a 84.1% snap share, 26.9% target share, and a 38.9% air yards share. All this came in what was a season of uncertainty in Houston.

Why He’s a Sleeper – Cooks may not end up being your WR1, but his consistency alone makes him an excellent option for WR2. His ADP is in the mid-50s, which means he could actually be the third receiver you take. So if your WR2 is already good, adding Cooks on top of that is going to be a lethal combination. He is almost guaranteed to have another 1,000 yard season considering Mills has earned the confidence of the Texans front office.

It’s a good sign as a receiver when your quarterback goes on the record saying how much they trust and look to you as part of the offense. That’s exactly what happened a few weeks ago when Lions QB Jared Goff spoke about WR Amon-Ra St. Brown, saying:

“He’s looked great, and he’s kind of taking the jump that we expected. He’s a hell of a player and a hell of a professional. I love throwing him the ball. And, he does a good job getting himself open.”

Goff would also compare Brown to Cooper Kupp, saying: “Both play in the slot. I think the first thing I noticed with both of them is the way they approach the game and the way they show up daily and how professional they are. So even before you get on the field, they both have a very similar mindset.

“But yeah, I think there are some comparisons there: late-round pick, guy in the slot, got a little chip on their shoulder. Both are extremely hard working, extremely internally motivated and both guys I’ve been very lucky to play with.”

That’s nothing short of high praise considering the season Kupp just had. St. Brown, on the other hand, was inconsistent last year. When he wasn’t productive he was borderline nonexistent. From Week 1 through Week 12 he averaged just 6.9 fantasy points per game. That all changed in Week 13 when he kicked off a string of games where he averaged over 25 fantasy points per game. In the final five games of the season – when the Lions played some of their best football – St. Brown saw double digit targets.

Even with a handful of other receiving targets – Hockenson, Chark, Williams, Swift – St. Brown appears to be establishing himself as a player with all the right skills in all the right areas.

Why He’s a Sleeper – Amon-Ra St. Brown is primed for a breakout season, similar to how the Lions as a whole are. He may not have the resume as other receivers on this list but he does have the faith of his quarterback and an impressive player comparison to back that up. His current ADP is in the mid-50s, and while there are other players on this list that fall into the range, I don’t think St. Brown is a bad option at all. He’s going to be a major target for Goff this season and is a lock for 950+ yards and 6 touchdowns.

If you didn’t expect a Jaguars player on this list, I don’t blame you; Jacksonville looked bad last year. You may be even more surprised by the name considering the signing didn’t exactly go over well and has since been regarded as a massive overpay. Putting all that aside, Christian Kirk may be the best option on this list (my personal favorite is Michael Thomas, but given how low Kirk is projected to be drafted the risk is minuscule).

Second-year quarterback Trevor Lawrence is poised to have a much better season in 2022 considering the coaching change, and is already enjoying working with Kirk. “He’s great. Just from a football IQ sense, I think he’s really quarterback friendly,” Lawrence said about him following a team practice in late May.

With Kirk slated to be WR1 in Jacksonville, he will only be productive if Lawrence manages to turn things around under Doug Pederson. Saying he had a rough rookie season is putting it lightly. He completed just 59.6% of his passes (359 of 602) for 3641 passing yards (214.2 per game), 12 touchdowns, and 17 interceptions. Lawrence finished the season as QB23 in fantasy production, which was the lowest ranking by any QB who started/played in all 17 of their teams games.

At this point it is almost undeniable he improves on those numbers in 2022. I think the highest he finishes would be QB10, with a more likely finish being around QB15. Using last year’s fantasy QB list as a reference, that would put Lawrence on par with Russell Wilson, Kyler Murray, and Ryan Tannehill. Coincidentally, Kirk was Murray’s top receiver in 2021 and finished just shy of 1,000 yards.

Kirk does come with a handful of concerns, notably his injury history and scheme fit. Historically, he is more effective inside than outside, which is a position that Jacksonville already has a few options at (Shenault Jr. and Agnew). But last year he showed plenty of flexibility by stretching the field and being a reliable deep threat for Murray, earning a 96.7 receiving grade on deep targets. When it comes to injuries, our algorithm gives him a High Injury Risk (24.8%) and a Below Average Health Performance Factor (47%).

Why He’s a Sleeper – New head coach Doug Pederson led the Eagles to a Super Bowl win over the Patriots in 2017 without a true #1 receiver. That season the WR room consisted of:

Of those, the only receiver who had proven himself was Jeffery, but he had only played in 12+ games once in his career up to that point. Their best receiving option that season was TE Zach Ertz, yet they still walked away as league champions.

What I’m getting at here is that Doug Pederson has proven himself to be a capable coach who can get the most out of his players. The expectation is that he’ll do the same in Jacksonville this season.

Kirk’s ADP is around 100 to 115 right now, which means there isn’t much risk in picking him up. By then you should already have a solid foundation of receivers. If Kirk stays healthy, I imagine he will have a 1,000+ season as Lawrence’s top target.

Don’t forget to check out our Draft Kit.