4 Players to be Wary of at their Current ADP 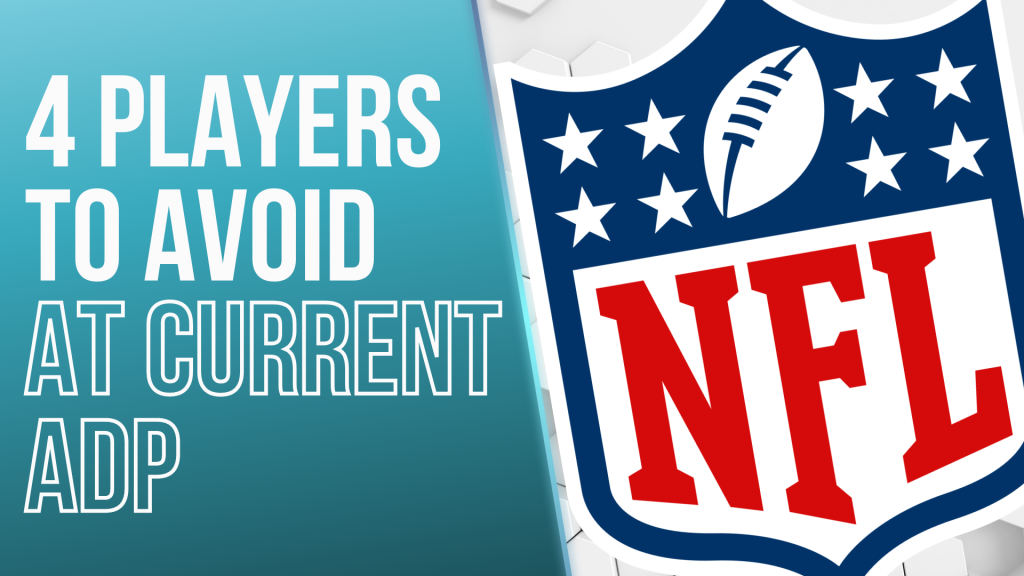 In contrast to our analysis of potential sleeper wide receivers, there is nothing worse than drafting a player higher than you should have. Today, we’re going to discuss some players who have the potential to disappoint given their current ADP. Now, it’s worth noting that almost all of these guys are guaranteed to be productive, however at their current ADP there are simply better options.

Rams RB Cam Akers’ current ADP is in the mid-30s, however the risk surrounding him is too great to take him at that evaluation.

Akers tore his Achilles during offseason workouts in July of 2021. It’s an injury that generally takes 9+ months to heal, however he managed to return in less than six months, joining the eventual Super Bowl champion Rams in the playoffs.

It was a recovery no one expected and everyone praised, so much so it was deemed miraculous by some. But when he came back he didn’t look the same. After averaging 4.3 yards per attempt in his rookie season, Akers managed just 2.4 in the five games he played in 2021.

Still just 23 years old, Akers certainly has age on his side, however the history surrounding Achilles ruptures is not positive. The NFL themselves published their findings about the injury in 2013, saying “our research concludes that no running back has ever recaptured sustained pre-injury form after rupturing an Achilles tendon.”

The significance of Achilles ruptures in running backs stems from the function of the tendon itself. The Achilles runs along the back of the calf, connecting the calf muscles to the calcaneus bone. It plays a crucial role in a player’s ability to stop, cut, drive, and jump – all of which are required to be an effective RB in the NFL.

Our algorithm gives Akers an Elevated Injury Risk (14%) and an Above Average Health Performance Factor (75%), which is decent all things considered. There’s no doubt the Rams will try to use him in an efficient and smart way, however at his current ADP their are safer and better options.

The Broncos RB room currently consists of Melvin Gordon and Javonte Williams (no offense to Mike Boone and JaQuan Hardy). Last season, the two combined for borderline identical seasons. Both had 203 carries, but Gordon tallied 15 more yards on the ground (918 to 903). Williams on the other hand saw more action in the receiving game, with 316 yards receiving while Gordon saw 213. Gordon scored more, though, with 10 total touchdowns to Williams’ seven.

That 50-50 split is likely to continue in 2022 according to those close to the Broncos camp. In one interview, first year head coach Nathanial Hackett cut off a reporter who asked why he wanted Melvin Gordon back, blurting out “He’s Melvin Gordon, man!”

Hackett also explained what he expects out of his running backs, never separating Gordon from Williams, always referring to the two as a unit. “When you add them into the pass game, they’re so integral,” he said. “A lot of people don’t know how integral they are because they open up holes for other people, and when holes close, they’re the ones that get the ball. When you get the ball to a back in space, we’re very excited about that.”

Williams is currently ranked as RB13 while Melvin Gordon is RB37. Williams’ ADP is 2.08 while Gordon’s is 8.04. For two guys who are expected to see similar opportunities, that gap is just too wide.

It’s fair to say that Gordon is getting older, and Denver is almost certain to want Williams involved a little bit more, but with the stacked AFC West they’re going to have no choice but to use the two methodically. If Gordon is the better option, he’s going to play. He’s also enjoyed plenty of success in the Mile High City. In two seasons with them, he’s averaging 4.6 yards per attempt, 61.4 yards per game, and 13.5 attempts per game.

I just don’t see a scenario where he gets cut out of the picture entirely, meaning Williams simply isn’t worth the early round selection.

Colts WR Michael Pittman is going to have the best year of his career this season, let’s get that out of the way first. However, the offense runs through a guy named Jonathan Taylor. Pittman’s current ADP is currently at 3.05 and his position ranking is WR12. At that valuation, it’s really just not worth it.

Receivers ranked below him include: Tee Higgins, Terry McLaurin, D.K. Metcalf, D.J. Moore, Diontae Johnson, Michael Thomas, Deandre Hopkins, and Brandin Cooks, just to name a few. Not to disparage Pittman, but there are simply better players who fit into their schemes more seamlessly.

The Colts currently have the 10th-best offensive line according to PFF, and put together the second-best rushing offense in 2021. Part of that was out of necessity – considering the Carson Wentz experiment didn’t exactly work out – but the other part of it was the fact that Jonathan Taylor simply couldn’t be stopped.

There’s no reason to think that trend will change this year. In fact, plenty of Colts fans wanted even more opportunities for Taylor last season, so why not give it to him this year? The good news for Pittman fans, though,  is that Matt Ryan has never had a season without a 1,000+ yard receiver, so he should cross that threshold easily.

This is one of the easier picks to avoid in my opinion. There are better receivers projected to go later and Pittman won’t even be the focal point of his offense. Better to take someone like Justin Herbert (3.09 ADP) or Tee Higgins (3.08 ADP) in that range. If Pittman slips to the fourth or fifth round in your league, though, grab him.

Vikings RB Dalvin Cook has been plagued by injuries since entering the league in 2017; it’s a shame considering how dominant he’s looked when healthy. Unfortunately, his injury history and Minnesota appearing to be going all in on a pass-first offense means he isn’t worth his ADP at 1.08.

Our algorithm gives him a High Injury Risk (30%) and a Peak Health Performance Factor (94%). That means that he is likely going to suffer another serious injury at some point this season. Missing time means missing points,

Also, with the hiring of Kevin O’Connell the Vikings made it clear to the rest of the league that they intend to capitalize on the talents of Justin Jefferson, Kirk Cousins, and Adam Thielen. Jefferson himself told reporters in late July: “Our offensive style, it’s not a run-first offense anymore […] Just us being able to put different people in different positions and distribute the ball, really, I’m so excited [to be] in this offense.”

It’s worth noting that there have been reports coming out of camp that indicate O’Connell plans to use Cook as a receiving option, but not much has been confirmed yet.

When it comes to drafting Cook, I don’t think he’s worth the risk for a first round pick. Mid second? Sure, grab him, but there are better options in the first round. I’d take Joe Mixon or one of the elite wide receivers first.

Don’t forget to check out our Draft Kit.